A Phase 1 Environmental Site Assessment (ESA) is an evaluation and report of environmental risks that commercial real estate either currently faces or could face in the future. It is common that a Phase 1 ESA is required by a lending institution providing the funding for a purchase or refinancing. When groundwater and soil become contaminated, it poses health risks not only for people who might rely on the groundwater as a source of drinking water. It can also be hazardous to wildlife, livestock and even pets. If a Phase 2 environmental site assessment (ESA) reveals the presence of hazardous materials or contamination, then additional investigation, as well as soil and groundwater remediation, may be necessary to resolve the issue.

A geophysical survey is an evaluation of the ground below the surface of a site. They are often included in a Phase 2 Environmental Site Assessment (ESA). Using radar and electromagnetic technology, the survey provides a non-invasive way to find and identify any structures or other underground features that may shed light on the storage and use of hazardous materials. Alpha’s Professional Geologists have successfully completed soil sampling and characterizations for hundreds of sites. To reduce cost and ensure accuracy, Alpha typically endeavors to utilize direct-push sampling technology, when available, to obtain core samples of soil. Once the sample results are received, Alpha scientists are able to determine if the sample results collected from the site represent human health and/or ecological risks that require further action. Alpha’s geologists and environmental scientists have extensive experience in soil testing & profiling of soil for disposal and/or reuse in accordance with regulatory requirements. To reduce the cost of disposal, Alpha’s soil sampling enables the soil to be reused or segregated and disposed of in the most cost-effective manner.

Groundwater remediation & characterization is performed by obtaining groundwater samples. If contamination is present, our geologic experts evaluate the nature, extent, and concentration of the contaminant plume. Following assembly of the data, computer modeling techniques enable Alpha’s scientists to determine the contaminant plume and migration. If contaminants are found that require removal, Alpha Environmental can handle all aspects of the project including; development of plans and specifications, furnishing excavation equipment, obtaining agency permits, and managing the remediation from start to finish.

Despite efforts to streamline the process to obtain regulatory closure, site closure requirements are as complex as ever and vary from county to county. Alpha Environmental has 25 years of experience interacting with local lead regulatory agencies and work on our client’s behalf to determine the most cost-effective approach for each investigation and remediation project.

Risk Assessment is used to determine potentially adverse environmental conditions and contaminants that may pose health and safety concerns. In order to have a clear conceptual understanding of a site, Alpha thoroughly assesses and models the key elements of the project including the Source, the Exposure Pathways and the potential Receptors.

If a source is confirmed on a site through testing and laboratory analysis, the concentrations of contaminants encountered in the soil and groundwater are compared to the Oregon DEQ Risk-Based Concentrations (RBCs). An RBC is the concentration of a hazardous substance in soil, water, air or sediment that is determined to be protective of human health and the environment under specified exposure conditions. RBCs are identified for the particular hazardous substances at a site and the specific areas or pathways, such as land or water, where humans and environmental receptors can become exposed to these substances.

Exposure Pathways are the means by which contamination may impact human health or the environment.  These pathways include the air, water, and soil. If a pathway is determined to be “complete” then the potential Receptors must be considered.

The following is the list of Risk-Based Concentrations (RBCs) for Oregon:

Receptors include the current and future potentially exposed population and the environment. In order for Risk to be present at the site, a source must be present, a pathway must be complete and a receptor must be present. If any of the three key elements are missing, there is no risk. 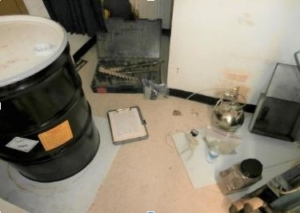 Vapor intrusion refers to what happens when chemical vapors migrate from the soil or groundwater into a home or other building. Many chemicals that move into buildings this way are classed as volatile organic compounds (or VOCs). The term volatile means unstable—which in turn means these chemicals are likely to exist in gas (aka vapor) form. Vapor intrusion has increasingly become more of an issue mainly due to the DEQ’s (and EPA) addition of more commonly found constituents benzene, ethylbenzene and naphthalene typically found in petroleum products.

Because they’re gaseous, VOCs can move easily through spaces between soil particles and tend to migrate from high-pressure to low-pressure areas. Since a basement is probably at lower pressure than the soil underneath, these vapors are likely to enter the basement (or other first level) through cracks in the foundation, walls, or floors. Some heating and air conditioning systems will literally pull the gases into the structure. Once they’re inside, natural air flow and ventilation allow the vapors to spread throughout the building. Vapor intrusion can cause indoor air to become polluted and unhealthy.

What Are The Risks Of Vapor Intrusion?

The degree of health risk vapor intrusion poses depends on the type of chemical and concentration of the chemical in the home. The most common sources of chemicals that can cause vapor intrusion problems are gas stations and dry cleaners. For example, a nearby gas station might have a leak or spill from an underground storage tank allowing gasoline to release to the soil and possibly groundwater. Short-term exposure to gasoline-related vapors can cause respiratory irritation, nausea, or headaches, and long-term exposure can contribute to long-term effects such as cancer. Vapor intrusion clearly can cause health risks to families. In addition, vapors might pose a liability issue if they intrude into a workplace.

How Do I Know If I Have Vapor Intrusion?

There are several ways to test whether toxic chemicals are entering a building: you can collect soil vapor samples in the ground nearby a structure or in the ground right under your foundation; or you may elect to collect indoor air samples.

If you learn that a nearby gas station or industry has had a toxic spill or leak, you might call the owners or government officials to request that they test your home for vapor intrusion. The Environmental Protection Agency (EPA) provides a lot of information about vapor intrusion and safe chemical levels.

WHATS SHOULD I DO?

Landlords, property owners, developers, and investors should take vapor intrusion very seriously. They should include Vapor Encroachment Screenings, Vapor Intrusion Testing in their due diligence activities if warranted.

If tests indicate that chemicals are intruding into your home or commercial structure, there are several actions you could take. You might seal any cracks in your walls or foundation. Or you could have a mitigation and/or remediation system installed.

Alpha has certified environmental consultants who conduct Vapor Encroachment Studies according to the guidance of the EPA’s ASTM E2600-10 “Standard Practice for the Assessment of Vapor Encroachment Screening on Property Involved in Real Estate Transactions.” A Vapor Encroachments Study is a method for evaluating the potential for a vapor intrusion condition.

In certain cases, geophysical surveys may be the most cost-effective or logistically viable method by which the subsurface features of site are evaluated. These surveys are generally conducted when attempting to determine whether subsurface structures exist, such as underground storage tanks, clarifiers, or any other features that may shed light on hazardous materials usage/storage.

If you are in need of a Phase 2 ESA in Portland or the surrounding Oregon area, or would just like to talk to someone about your property, call Alpha Environmental today at 503-292-5346 for more information.

What is a Phase 1 Environmental Site Assessment?

If you are considering purchasing or redeveloping property, you may be surprised to discover that you might need a Phase 1 Environmental Site Assessment, also

In our society, almost every property is liable to environmental risk. Without careful inspection from environmental professionals, many unseen problems can go undetected. A Phase

What Is A Phase I / Why Do I Need One? Whether it is your first commercial property or your fourth, you may have heard

Our goal is to get the job done right while protecting our client. We are committed to ensuring you are safe in your residence, no matter what. We are fully licensed, bonded, insured, and here to help with all of your environmental needs.

For over two decades we've been doing the dirty work, serving residential and commercial customers in the greater Portland area

David D.

Lake Oswego, OR
Read More
My wife and I experienced a hot water pipe busting in the crawlspace. It has been a total nightmare. However, Chris and his team provided expert quality care, with timeliness and the greatest degree of professionalism. I would HIGHLY recommend Alpha Enviornmental!
Zhanna S.

Beaverton, OR
Read More
Can’t say enough about Alpha Environmental! Their costumer service is 10/10, they have really good systems in place, responsive, and professional. The gals in the scheduling department are always so kind! As a real estate agent, I use Alpha’s services numerous times a year. Either it’s for Mold bids, oil tank decommissioning, radon etc. They always do a fantastic job! Thank you for all the work you do!
Kristen L.

Portland, OR
Read More
Wow where do I even begin?? We’re absolutely thrilled by the work Alpha has done for us and we’re eternally grateful to them for ridding our house of asbestos tile! They’re polite, kind, professional — from estimator Filo to manager Dame to Jake, Melvin and the other two guys on the crew (so sorry we didn’t get your names) — you guys are awesome and we so appreciate your help. Our house looks amazing. The peace of mind you’ve given us is priceless. We can’t thank you enough. We’ll certainly be in back in touch if we ever need any of your services again. Thank you thank you!!!
Jeff S.

Salem, OR
Read More
Alpha environmental's employees were punctual, pleasant to work with and there services are reasonably priced. I highly recommend them because I would use them again in the future.
Lea C.

Tualatin, OR
Read More
Took a water sample in for lead testing and they were so fast and helpful. Rodolfo was so nice and informative in explaining the testing and what it meant! Would definitely recommend everyone to go there and will go to them for any future needs!
Claire B.

Portland, OR
Read More
Alpha environmental was extremely helpful in navigating me through the process of testing some leftover construction debris for asbestos so I could take it to the dump. Their office manager spent time with me on the phone discussing the options for sample collection, and was extremely friendly in answering my many questions. Sample drop off at the office was easy and the results even came back a few days earlier than expected. Will definitely return if I need more sampling done!
Jeff C.

Tigard, OR
Read More
I would highly recommend anyone wanting, quick efficient services relating to environmental testing to check out Alpha Environmental. Not only was the staff friendly and responsive, but also professional! If I could 6 stars out of 5, I would!
Jotham P.

Portland, OR
Read More
We used Alpha Environmental Services to conduct our home inspection, radon testing, sewer scope and oil tank decommissioning. Every part of their service was really professional. They took so many great photos of the house during the inspection and offered lots of explanation on what they found. Great team. Highly recommend!
Previous
Next

Oregon Construction Contractors Board License No. 152125